Incremental Reading: How I Use This Program to Learn with Self-Explaining 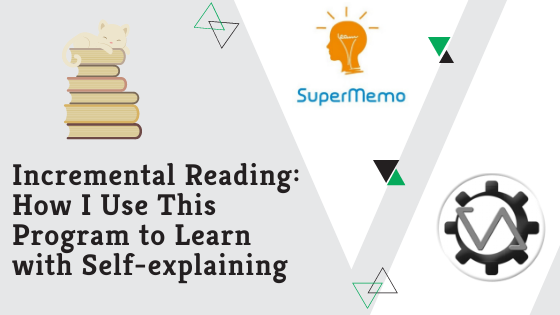 Contents
Abstract
I use this “free” software VoiceAttack. During Incremental Reading, it’ll prompt me some questions from the Socratic Method, so I can think of possible answers to act as active reading.

Self-explaining is one of the eight learning techniques mentioned in Learning as a Generative Activity. The other seven are summarizing, mapping, drawing, imagining, self-testing, teaching, and enacting.

Summarizing: During Incremental Reading, you extract important portions, then condense, summarize and rewrite the extracts in your own words. After that, you can opt to make flashcards out of them. Incremental Reading is like progressive summarization but with an automatic review schedule.

Self-Testing. Essentially the very core of any Spaced-repetition Software (SuperMemo/Anki).

Mapping. I don’t like drawing paper-and-pen mindmaps. It breaks my learning flow and just too much trouble. I tried digital mindmap solutions like xmind, but I found making virtual mindmaps still too inflexible. Currently, I use mermaid in Obsidian to achieve similar results (I’ll have other articles on this in the future.)

PS: All quotes are from the Self-Explaining section from Learning As A Generative Activity

Learning environments can be classified into four basic categories:

(1) passive: learning environments that involve no physical activity from the learner, such as listening to a lecture or reading a textbook

(2) active: learning environments that involve some form of physical activity from the learner, such as highlighting or underlining a textbook

(4) interactive: learning environments that involve learner dialogue with another person (e.g., a peer or expert) or system (e.g., a computer-based tutor).

Self-explaining occurs when students explain the content of a lesson to themselves during learning.

Students may read a lesson on how the human circulatory system works and generate comments that explain how the system works in their own words, including how the information they are currently reading relates to previous information in the lesson and their relevant prior knowledge.

Self-explaining causes learners to select relevant elements of information from the lesson, organize them into a coherent mental model, and relate them to their existing mental model.

Chamberland and colleagues tested whether asking students to generate self-explanations fosters medical students' ability to solve clinical cases. The results indicated that students who generated self-explanations during training were better able to diagnose unfamiliar cases on a subsequent transfer test (d = 0.75), whereas the groups did not differ in their diagnostic performance for familiar cases (d = -0.27).

I think these techniques are similar fundamentally:

Feynman Technique: Pretend you are teaching it to a kindergartner

Elaborative interrogation: Asking “why” questions (e.g., “Why would that be true?")

The Generation Effect: The more often you self-generate material, the better it will be established as a long-lasting memory. - MARGE: A Whole-Brain Learning Approach for Students and Teachers

When you do self-explaining, the technique retrieval practice is baked in. When you’re thinking you’re obviously recalling information. The question “What’s that about?” is mainly about recalling the content to working memory. The question for example, “what would happen if x is gone?” however, requires not only bringing the content to mind but also process, manipulate, connect or integrate it in some way, e.g., think about how those pieces of information relate to each other in working memory.

During Incremental Reading, when I’m reading long Topics, I pause randomly and think. My thought process is simple. At the most basic level, it’s just free-recall with the question “what was that about?” before hitting “Next”. Whenever I come across a point or idea that’s worth thinking,

“What does it mean?”

“What do I already know about this?”

Whenever I do this, usually only the most salient ideas or concepts are recall-able. Other times when I don’t agree with some parts I naturally pause and think why that’s the case. This forces me to at least try to think and avoid the auto-pilot mode. Of course, it’s easier said than done: it takes a lot more conscious effort to do so. It increases my time spent on each rep, rather than rapid-firing with the reps. The amount of reps I can do is a lot lower. But at one point you have to ask: are you doing the reps for the sake of clearing away today’s reps or actually learning? The obvious answer is learning, but it’s easy getting caught up in the reps game. Therefore I’m using the following program to facilitate self-explaining rather than “just think about the content more often.”

VoiceAttack is a program with “voice-activated control for your PC games and apps.” We’re not the target audience but it’s still useful for our case. The free trial version is more than enough since we only need one command.

I’ve incorporated VoiceAttack in my SuperMemoVim so that when I press c in normal mode, it’ll prompt me a question.

Come to think of it, you don’t need to use VoiceAttack. You just need a program that “when you press a key it’ll play a random TTS mp3.” Making an ahk script might be good enough.

Automate Self-Explaining with the Socratic Method Via VoiceAttack

I’ve copied the list from the Socratic Method into VoiceAttack. I think they’re great guided questions for self-explaining. Here is my setup in VoiceAttack:

When I press a trigger it’ll randomly select and play a question from the list. It gives me different questions instead of the never-changing question “What’s that about?” It’s like a virtual study companion, like the middle ground between constructive and interactive learning environment (initial quotes above). I don’t think your friends and family members will listen to you talk about [insert your subject of interest] all the time, so this virtual assistant could somewhat simulate that study buddy experience whenever you want. Or if you want, you can talk to a rubber duck, but it won’t ask you questions.

Sometimes, I have to bend the question to make it answer-able to fit the learning context. For example, if I’m learning about, say, the Krebs Cycle, then the question “What would happen then?” fits well. I could try to recall the steps and answer “What would happen if acetyl-CoA never joined with oxaloacetate to form citrate?” However, if I’m learning about the Krebs Cycle but I get the question “How does it apply to everyday life?”, it’s not contextually relevant, so I just press again to get another question.

Another study found that more specific forms of prompting resulted in better learning than more general prompting. Overall, this research suggests that when learners are required to generate responses on their own, more focused forms of prompting may be most effective.

The limitless-ness and vastness of open-ended questions that you can ask yourself can be overwhelming. Basically, you can try to give explanations to endless questions. For example, you can elaborate upon these questions about any particular content:

“What would happen if x is missing?”

“Can you explain the process y in your own words?”

“How are process x and process y similar?”

Without VoiceAttack I was pretty direction-less: “What to think about?” or “What question should I ask myself?” When I “think about” the content, it’s mostly just rephrasing it in my own words. Of course, this one question, “What’s that about?”, recalling what you read is beneficial in its own right. But in this way, different facets or aspects, such as compare and contrast, connecting it to prior knowledge is never thought about.

Having the awareness to press the trigger button, get a question, and then think about it is largely arbitrary and elusive. For example, when should I press the trigger button while reading? How do I decide? How long should I explain it? In other words, I might come across an important Topic, but the thought of “Hey, it’s important. Get a question and think about it” may never surface, so I’ll miss it.

Answering a question before moving onto the next Topic is a good way to make self-explaining a habit. However, doing this for every Topic is mentally exhausting and time-consuming. Besides, some Topics are just not worthy of such mental effort. Thinking is hard. So I don’t do it for every Topic to balance between the quality (time spent on each item) and quantity (items to go through). So I just leave it at that. If I don’t consciously stop and think about it, I just assume it’s not important enough to be surfaced and registered to “hey stop and think about it now.”

Being asked these questions keeps me in the active thinking mode. I may be blank after the question “What’s that about?”, in this way I know something is wrong: either I don’t understand the content, or I was daydreaming (on auto-pilot mode) while reading. However, if it’s my initial encounter with the material, I just move on and try again next time. Self-explaining requires prior knowledge. During my first encounter with the material, I don’t have much prior knowledge to draw from, elaborate upon, and connect to. I need time to “internalize” and “digest” the material. After all the learning that’s happened in the meantime (spaced retrieval practice through flashcards, interleaving of reading material, progressive summarization of Topics, different attempts to answer those questions, and memory consolidation through sleep), when I encounter the same Topic again, I’ll have a higher chance of generating a legitimate and reasonable response.

This is my concrete implementation of the “self-explaining” learning strategy, rather than the elusive advice of “think actively about what you read”. I hope it’s been helpful.

Updated on 2021-02-07
Back | Home
What I Wish I Knew When I Started Using Anki for Korean: Vocab Cards and Sentence Cards How I used SuperMemo to Master Vim in 10 Days