What I Wish I Knew When I Started Using Anki for Korean: 3 Tools and 3 Tips for Learning a Second Language 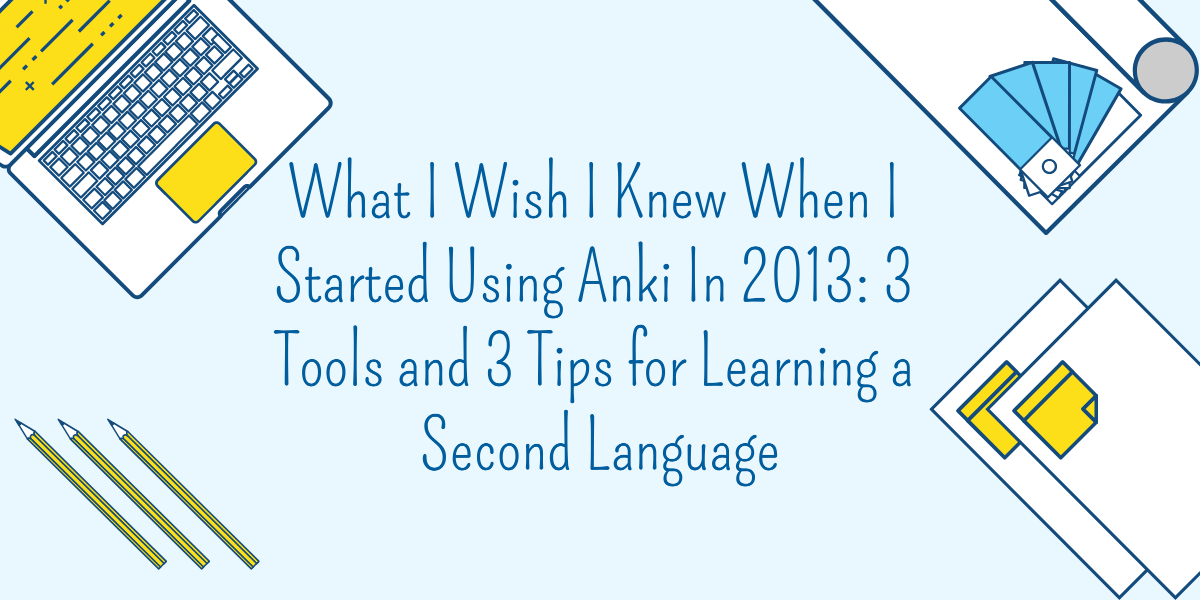 Mini-series: What I Wish I Knew When I Started Using Anki In 2013 (language learning edition):

Should I Learn a Second Language?

3 Tools and 3 Tips for Learning a Second Language (You’re here!)

In my last article Should I Learn a Second Language? I talked about the bigger picture: should I learn a second language? Because in my case, with the benefit of hindsight, I should have nipped the idea of learning Korean in the bud because I didn’t know what it entailed: the dedication and time commitment needed to become fluent in Korean. However, if after reading that you’d like to continue studying your target language (there’s nothing right or wrong about that), here are my tips and tools.

Tips on using Anki for learning a language

PS: I’m not sure how applicable they are now as I’m not familiar with the current Anki/learning-a-second-language landscape. Make of it what you will. Also, I talk about them in the context of Korean/Japanese, but they should also be mostly applicable to your target language.

#1 Make your own cards

For simple vocab cards such as:

it’s probably fine with pre-made decks. You just don’t get to choose which image to use. However, say you like Japanese anime, the following is probably much more enjoyable if you’ve watched the show:

But beyond such simple and concrete vocab, prior knowledge will play a big role. You need to tailor the cards according to what you already know (prior knowledge). It’s even more so with the case of N+1 sentence cards. N+1 means that in a sentence, there’s only one vocab that you don’t know, hence being the target cloze. You need to decide and pick a sentence that’s N+1: you understand the sentence structure and the surrounding context but not the vocab. When it’s N+2 for you you need to skip it. Beyond N+1 means that it’s too difficult and not atomic: too many unknown vocab will obviously hinder comprehension. The surrounding sentence is supposed to show you how the target vocab is used in context, and a way to go beyond simple vocab cards. It should be short and sweet. Providing extra information or vocab in hopes of “soaking it along the way” isn’t going to work.

It’s about how much thought you put into card creation. When it’s personalized it’s more enjoyable. You might resonate with one sentence but not the others. You may like one particular image over the others. This helps with motivation. You can add images from your favorite shows or anime or whatever that’s personally relevant to you. Besides, for every minute you spent making them, you’ll spend 10x the time for review, so it’s important to make it as enjoyable as possible.

This article I’ve been with Anki for 12 years. Here are 10 things I’ve learned about advanced language learning. is highly illuminating. Give it a read!

This is related to the above point: creating cards takes a lot of time. However, the process of item creation is itself a learning process, so don’t treat it as some manual labor that can be outsourced with pre-made decks. However, under the umbrella term of “making cards yourself”, there are the necessary and the unnecessary parts:

Necessary parts: choosing what vocab to learn, the image(s) for your vocab cards, deciding which sentences to use or skip etc.

Automate these unnecessary parts as much as possible. Basically, if you need to consciously and deliberately think about the process (e.g., which sentence that’s N+1 for you), it’s necessary. If you can mindlessly do something, you should automate it.

In Audacity, the “Sound Finder” function can automatically split audio into short clips. This is helpful to add high-quality native pronunciation to your sentence cards (instead of TTS-generated ones).

I remember I was manually and faithfully copying and pasting Korean vocab into Naver dictionary, then copying and pasting again to Anki. A lot of time was wasted on such busywork. To make 1000 vocab cards I needed to copy and paste 2000 times. Then it hit me: I could automate this. I got a programmer to make the following program for me:

This is the program I had for scraping entries off Naver. It’d automatically download the mp3 pronunciation files, along with the vocab fields as shown. Then I could batch import them into Anki. Magic!

If you’re technically inclined, you can create a script that automatically scrapes entries (not random vocab of course) off the dictionary. Then you can batch import them into Anki at once. No more manual copy and paste. If not, you can simply hire someone to do this for you.

If you’re reading with LWT (more on this below) and you have a list of target vocab to learn, you can make a script to feed this vocab list to a dictionary, scrape the entries (maybe even some images for you to choose from) and pick sentences from sentence banks that are N+1.

This is bad: feed the vocab from a frequency list to a sentence bank, then batch generate sentence cards directly into Anki. This is better: feed the vocab list you gathered from anime or books and have it output sentences so you can look for N+1 or personally relevant sentences before importing them into Anki. You see, the unnecessary parts are automated as much as possible while still keeping the necessary parts for context and personally relevance.

sub2srs is an amazing free software: you just give it a video source and a srt file. It’ll process them and give you hundreds of a-few-second video clips with its corresponding subtitle. I remember I’d take Korean videos with its subtitle file, run it through the program to extract sentences like this source:

Learning With Texts (LWT) is a free and open source software to practice reading and have integration with Anki.

I think the subreddit r/LearnJapanese is the most up-to-date resources on how to best use Anki for learning languages. Even if you’re not learning Japanese, most of the tips are probably transferable to your target language.

I also recommend the YouTube channel MATTvsJapan. Given his impressive Japanese fluency and his methodical approach towards learning a foreign language, I think you’ll benefit from him even though you may not be learning Japanese.

If you’re indeed learning Korean, you absolutely need to use Naver dictionary, Talk To Me In Korean and How to Study Korean. I just checked and they’re even better now.

I still think the default Anki setting is too harsh, but I have no concrete idea on how to actually tweak the setting (In SuperMemo everything is handled by the algorithm. The algorithm isn’t customizable.) For reference pleas see My BIGGEST Discovery From Tweaking the Anki Setting.

Now that you know better, it’s time to learn better.